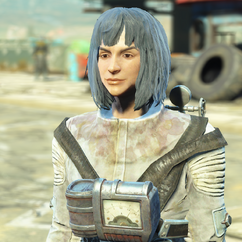 Dara Hubbell is the leader of a group of Hubologists at Nuka-World in 2287.

Dara claims that she is a direct descendant of the founder of Hubology, Dick Hubbell. She is leading a group of Hubologists in at their camp near Nuka-World. She is looking for spacesuits and trying to repair an old UFO ride in the Nuka-World junkyard, believing it will take her and her fellow Hubologists to another world.

Dara Hubbell appears only in the Fallout 4 add-on Nuka-World.

Hubology contains a large number of references to real-world Scientology. One such reference is Dara's name, which is similar to that of L. Ron Hubbard's second wife's first name, Sara Northrup Hollister, who played an important role in the creation of dianetics, a practice used by Scientologists to supposedly connect to one's spiritual and metaphysical mind.

Add a photo to this gallery
Retrieved from "https://fallout.fandom.com/wiki/Dara_Hubbell?oldid=3465130"
Community content is available under CC-BY-SA unless otherwise noted.