Bob
“That's right. By day, I'm Daphne, a mild-mannered assistant to help you with your camp. By night, I'm someone else! The Wizard of the Wasteland! A seeker of truth and justice! I point the looking glass to your eye, and a magnifying glass to the world! I'm the super, and duper, one of a kind magician detective, The Inspector!”

Daphne is a potential lite ally in Appalachia. By day, she is Daphne but by night, she role-plays as the Inspector.

Daphne will offer the Vault Dweller different buffs, depending on what time of day she is spoken to. During the day, Daphne will grant the player some bonus Luck and the ability to identify magazines and comics more easily. As The Inspector, Daphne casts a spell to increase the player's Perception, helping them find more food from containers, and extra caps from caps stashes.

She was unlockable upon reaching rank 25 of The Unstoppables vs The Diabolicals season, and a plan for her was released with the Night of the Moth update.

Daphne is a young girl with a severe case of amnesia, as she does not remember her parents. She mentions she lost her teddy bear Franklin while running in the woods, and that one day, she woke up with a headache and was all alone. She found what seemed to be an adult-sized backpack with a magnifying glass, some food, and an Unstoppables! Board game. She has a feeling that whoever owned the backpack, she played together with them.

She had an imaginary friend named Sherman who is British, kind, intelligent, would give her advice, and liked tea. She found him hard to understand because his accent was so thick. She eventually moved on from him, feeling that it was time she grew up and started to make real friends. 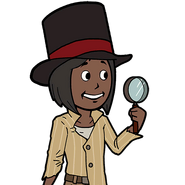 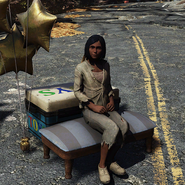 Daphne sitting on her toy box