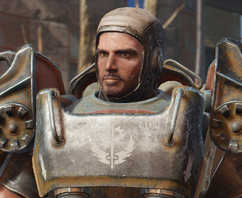 “Ever since Cutler died, I've seen other soldiers come and go. Some were brave, some were honest... hell, some were even downright heroic. But I'd never consider any of them to be a good friend, a friend like Cutler was... until now.”— Danse explaining his hatred of super mutants.

Paladin Danse, unit designation M7-97,[1] registration DN-407P, is the commanding officer of the Brotherhood of Steel unit known as Recon Squad Gladius, deployed to the Commonwealth in 2287. He is a possible companion in Fallout 4.

Danse's earliest memories are of growing up an orphan living in the Capital Wasteland. As a child he made a dangerous living by scavenging the D.C. ruins until he could afford to open his own junk stand in Rivet City. It was at that time he befriended a man named Cutler, and together the two scraped by as traders.[2]

When the Brotherhood of Steel began recruiting, Danse and Cutler agreed it was "the best way out of [their] nowhere lives." Under the command of Paladin Krieg they both became successful soldiers, but a year after being posted to the Prydwen Cutler disappeared on assignment. Danse spearheaded a three-week search for the missing squad which ultimately led to a super mutant hive. There it was revealed that Cutler's team had been killed, and Cutler himself had been exposed to the Forced Evolutionary Virus. Danse, saddened to discover his friend had been mutated, killed Cutler. The experience incited an intense hatred in Danse of most non-humans including super mutants, ghouls, and synths.[3]

By the year 2287, Danse had risen to become one of Arthur Maxson's most respected officers. He was assigned a reconnaissance team and dispatched to the Commonwealth to investigate the Institute, but misfortune quickly reduced their force to three survivors. When the Sole Survivor first encounters Paladin Danse, he and what's left of his squad are holed up in Cambridge Police Station, unable to proceed with their mission. Danse enlists the aid of the Survivor to help retrieve an item from the nearby ArcJet Systems complex. Afterward, he offers the Survivor the rank of Initiate in the Brotherhood of Steel, should they wish to join.

Danse becomes a full companion following Shadow of Steel provided the Survivor enlists with the Brotherhood. He is fiercely loyal to the order and travels with the Survivor to ensure their ideals are being upheld. As their relationship develops Danse confesses to being burdened by the losses of colleagues, friends, and mentors killed by the many horrors of the wasteland. Unwilling to let their sacrifices be for naught, he asserts the Institute and its synths must be eradicated for the safety of mankind. He believes synths are the embodiment of technology spiraling out of control, and their existence could bring about the end of humanity.

As the main story progresses the Sole Survivor will have an opportunity to hack into the Institute's mainframe. Should they provide the Brotherhood with a copy of this data it is confirmed through DNA analysis that Paladin Danse himself is a missing synth, designated M7-97. Danse goes AWOL and flees to Listening Post Bravo. Outraged by the apparent infiltration of his inner circle, Elder Maxson orders the Survivor to track Danse down and execute him.

Once located, a suicidal Danse is adamant he did not know he was a synth. The disgraced paladin then encourages the Survivor to carry out their orders, insisting that he "must be the example, not the exception." The Survivor must then choose to execute Danse or convince him to leave the Commonwealth. If persuaded to run Danse will leave the bunker only to find that a suspicious Elder Maxson has followed the Survivor to his hiding place. A confrontation will occur in which the Survivor will again have to decide the synth's fate. Should Danse survive the events of Blind Betrayal he will be grateful and, with Maxson's promise not to have him hunted down, stays to aid the Survivor in their mission.

When they rendezvous sometime later Danse is still coming to terms with his nature. Though grateful to the Sole Survivor for saving him, the sudden loss of his identity, memories, and career leave him grasping for answers. The Sole Survivor can attempt to comfort him and, if so desired, may express a romantic interest. Danse will recoil at first, shocked the Sole Survivor could be in love with a synth but eventually admits to feeling the same way. He asks for patience as he works through his "human emotions" and vows to remain steadfast at his partner's side.

Danse has the authority to grant the Sole Survivor membership into the Brotherhood of Steel.

Paladin Danse can be acquired at the shop by any player character that has Charisma. When he is the active companion and there is another player character within two spaces, the owner can exhaust him to move the target character one space in any direction. If the owner has the Idolized trait when they do this, they will lose it.

Danse appears in Fallout 4 and Fallout: The Board Game.

Unused dialogue suggests that Paladin Danse and the Sole Survivor were originally able to challenge Maxson's authority as elder through combat according to "the Litany." Through his defeat, it would have allowed Danse to regain his status as a paladin and grant the Sole Survivor the rank of elder within the Brotherhood.

Danse without his hood

Danse's icon from the Know Your Enemy perk

Danse without his power armor during Blind Betrayal 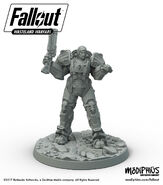 Retrieved from "https://fallout.fandom.com/wiki/Danse?oldid=3351816"
Community content is available under CC-BY-SA unless otherwise noted.