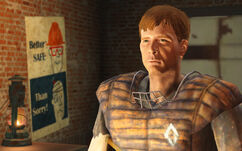 Jewel of the Commonwealth
In Sheep's Clothing

Danny Sullivan is the gatekeeper for the main entrance of Diamond City in the Commonwealth in 2287.

Danny is the Diamond City security officer responsible for monitoring the main entrance to the city for potential threats and troublemakers.

However, Piper uses the arrival of the Sole Survivor to pressure Danny into opening the gate, by convincing him that the Survivor is a local trader coming up from Quincy and threatening him with the wrath of Myrna if the gate is not opened. This inadvertently restores Piper's access to the city.

After letting the Sole Survivor and Piper in the city, Danny can be spoken to behind the counter at the entrance. There is an easy Charisma challenge and if choosing to lie to him, one will get the same conversation again and be able to attempt both challenges.

Danny Sullivan appears only in Fallout 4.

Retrieved from "https://fallout.fandom.com/wiki/Danny_Sullivan?oldid=3297769"
Community content is available under CC-BY-SA unless otherwise noted.