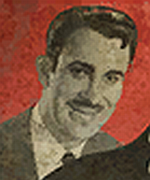 Danny Parker was a famous jazz musician before the Great War. He played in casinos around America along with fellow musician Paul Clooney. Danny may have played the piano, considering his poster features one, although it is unknown. He knew fellow performer Dean Domino but the two weren't on friendly terms. According to Dean, he was a stingy man[1] who wore too much hair gel.[2] His fate after the bombs dropped is unknown.

Danny Parker is mentioned in Fallout: New Vegas and its add-on Dead Money. He is also seen on pre-War posters in several locations.

Danny Parker's poster in a Fallout: New Vegas loading screen
Add an image to this gallery

Retrieved from "https://fallout.fandom.com/wiki/Danny_Parker?oldid=3196113"
Community content is available under CC-BY-SA unless otherwise noted.