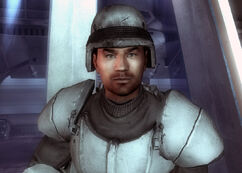 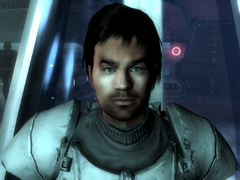 Daniels without his helmet

Sergeant Daniels is a soldier found in the cryo lab section of Mothership Zeta in 2277.

Attached to the 108th Infantry Battalion, Sergeant Daniels led Elliott Tercorien's squad in a battle pitting the U.S. Army against the Chinese. Part of a medical team, Daniels erected field tents and radioed for evacuations after surgery, or if a casualty's wounds were too severe to treat on the battlefield.[1]

* He receives a Chinese assault rifle from Elliott Tercorien if he is correctly revived.

Both he and Beckett lose health naturally over time and will not heal themselves, even if somehow given stimpaks; this will eventually lead to their deaths. Additionally, Beckett and Daniels will die immediately upon the destruction of the cryo lab generator as part of a scripted event.

Sergeant Daniels appears only in the Fallout 3 add-on Mothership Zeta.

Retrieved from "https://fallout.fandom.com/wiki/Daniels_(Mothership_Zeta)?oldid=3455225"
Community content is available under CC-BY-SA unless otherwise noted.