Forging Trust
Property Rights
Over and Out
The Best Defense

Dapper
“Paladin Rahmani's actions are unbecoming of her station. She carelessly shares resources, takes unnecessary risks and doles out her trust to anyone who takes an interest in joining us, regardless of merit. The Brotherhood she's building is not the one I believe in.”

Daniel Shin is a knight of the Brotherhood of Steel and the second-in-command to Paladin Rahmani of the Brotherhood First Expeditionary Force. The group was sent on a mission to re-establish contact with Elizabeth Taggerdy's Appalachian Brotherhood. Shin's Brotherhood comes from Lost Hills, California.

Shin holds the elders in high regard and is loyal to them. While he respects Rahmani's altruism, he dislikes her for not following the standards of the Brotherhood's strict codes and laws. Shin and Rahmani enter frequent arguments with each other.

Knight Shin has been a driven and dedicated member of the Brotherhood for nearly 20 years.[2] He was recruited from the Mojave Wasteland around 2083, when a Brotherhood force under Knight Connors saved his home town from a raider attack.[3] Shin's uncommon valor during the defense earned him Connors' notice, a place within the Brotherhood's ranks, and a lifelong hatred of raiders and their ilk. His focus and commitment to the Brotherhood have drawn praise from the Council of Elders up to and including High Elder Roger Maxson.[4]

On the Brotherhood's expedition, they came across a town that was being threatened with massacre by Raiders who were stealing their supplies. Rahmani decided to stay and fight the Raiders, while Shin decided to arm ordinary civilians with weapons they found for protection against the Raiders, which violated the Brotherhood's protocol to safeguard them instead of distribute them. The Raiders were able to steal their weapons and slaughtered everyone in the town except for Marcia and Max Leone. Connors would save Shin once again at the cost of his life.[5] Since this incident, Shin has harbored great guilt and vowed to never let his emotions hamper his judgement, although Rahmani believed he needed to forgive himself as he was ultimately trying to help. This incident would set off a division between Rahmani and Shin, with Shin wanting himself and Rahmani to stand trial with the Council of Elders. Marcia blamed both Rahmani's and Shin's actions for the tragedy, feeling no one should have retaliated against the raiders in the first place.[6]

Shin's fierce devotion to the Brotherhood's ideals makes him an effective officer whose performance is exemplary. He is also single-minded with little patience for distractions or disagreements, especially from subordinates or non-members. He is particularly resistant to change and any challenges to the Brotherhood's authority or tenets, which is a point of contention between him and his superior, Paladin Rahmani. However, Shin will give credit where credit is due, appreciating a job well done and saying so, regardless of his personal opinion. Despite his cold exterior, Shin truly cares for the future of humanity, hoping that the Brotherhood can create a safe society going forward. Ultimately though, Shin says those ideals mean nothing if he cannot protect the people who believe in him.[7]

On a day-to-day basis at Fort Atlas, Shin is in charge of the armory and its equipment. He also leads various combat operations, due to the low amount of senior officers at the fort. His occasionally unwelcoming attitude is a result of his steadfast commitment to both his responsibilities and the values of the Brotherhood, stating that his duties "do not include human resources."[8]

Over the course of their reinforcing of Fort Atlas and establishing themselves in the region, Shin and Rahmani came into multiple conflicts of personality through various matters, the most important of which is the resurgence of government rocket launchers and other weaponry, used in the same incident that Shin believes he and Rahmani should be taken back to Lost Hills and tried for. During a mission to re-establish contact with the Brotherhood in California by using a long-range transmitter, Rahmani tries to persuade the Vault Dweller to her side, asking them to destroy the transmitter with her to help create a Brotherhood she strives for, free from the control of the Elders. She reveals her intentions of severing ties with the main body of the Brotherhood of Steel and seeking to form her own, independent Appalachian Chapter of the Brotherhood of Steel.[9][10] Whether or not the Vault Dweller participates, Rahmani destroys it regardless, angering Shin who no longer deems her part of the Brotherhood. However, before they can continue debating any further, they receive word of a super mutant attack at Fort Atlas, which caused temporary need of unity from both Rahmani and Shin.[11] Back at the base, Rahmani's actions also shock Valdez, who is annoyed another issue has arose between Rahmani and Shin. The super mutant attack is dealt with.

Nevertheless, a year later in 2104, Rahmani and Shin are still at odds over their Brotherhood's primary mission: Protect the people in Appalachia, or secure all manner of pre-War tech to prevent it from causing another apocalypse like the Great War. They soon discover that the super mutant attack on Fort Atlas was not coincidental. Dr. Edgar Blackburn, one of the people who came to Fort Atlas earlier looking for help from the Brotherhood, only to be turned away by Shin, had been kidnapping people from all over Appalachia to use as test subjects in his research to improve the Forced Evolutionary Virus.

Shin, along with initiates Erika Hewsen and Norland, decide to investigate the Uncanny Caverns after hearing the super mutants may be originating from there. Norland ends up being killed after the group separates and Shin blames himself for the death of someone else again. As they venture further into the cavern, Hewsen ends up becoming caught in an explosive trap and Shin tries to rescue her in his power armor, injuring himself. With Hewsen's aid, they eventually return to Fort Atlas.

Later, Rahmani learns that Blackburn was among several of the Blue Ridge's caravans, especially one that holed up in the Harpers Ferry tunnel due to a radstorm. After Blackburn was captured during his work inside Vault 96, Rahmani and Shin take him to the West Tek research center, where his fellow scientists Farha, Jain and Nellie Wright were putting the final touches on the FEV to release into the water and air, which would lead to more people being turned into super mutants once exposed, a worst-case scenario even worse than Huntersville. In a bid to prove their research is for the betterment of humanity in the wasteland, Blackburn willingly volunteers to be exposed to the virus himself, but a miscalculation or malfunction in the process causes Blackburn to be turned into a violent super mutant behemoth, forcing Rahmani and Shin to kill him.

After, Shin erupts at Rahmani, scolding her that something like this was just what the elders wanted to prevent: People trying to play God with science. Though Rahmani agrees with him on that, when they confront Farha, Jain and Nellie, they plead for mercy and ask that their lives be spared, considering that their research is invaluable to the wasteland with the loss of schools and universities because of the Great War and the decay that followed. Though Rahmani wants to spare them because of how valuable human life is nowadays, Shin is adamant that they be slain after seeing firsthand just how dangerous their knowledge is should it fall into the wrong hands if they are allowed to live. In the end, the conflict over Blackburn's associates results in Rahmani and Shin parting ways, unable to reach an agreement, with one either being killed or allowed to return to Maxson, while the other takes command of the Brotherhood to lead them on their new duty to Appalachia.

Bethesda revealed that the majority of players side with Rahmani over Shin, showing results where 82% of players chose Rahmani and 18% chose Shin.[Non-canon 1]

Daniel Shin appears only in Fallout 76, introduced in the Steel Dawn update and expanded upon in the Steel Reign update. 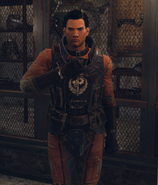 Shin with Norland and Erika Hewsen during A Knight's Penance

Shin mourning the loss of Norland 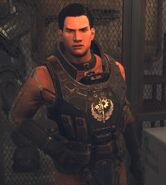 Shin healing from his injury after A Knight's Penance 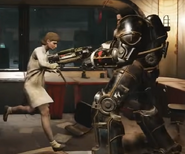 Nellie Wright trying to kill Shin with a knife

Shin addressing the Brotherhood after he is sided with

Shin in a trailer

Shin and Rahmani in a trailer 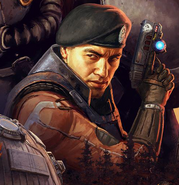 Shin on an artwork for Steel Dawn, wearing a Brotherhood of Steel beret and equipped with a cryo Crusader pistol

Shin on an artwork for Steel Reign, equipped with a Gatling laser

The quest icon that shows during the Steel Reign questline, showing Rahmani and Shin divided