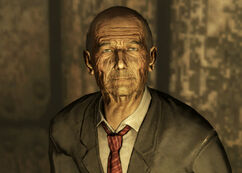 “You may darken our doorstep at any time, so long as you bring me what I ask for.”

Daniel Littlehorn is the enigmatic head of Littlehorn & Associates in 2277.

An elderly man with a sharp suit and a penchant for French Traditionalist painters, Daniel Littlehorn has run his organization for as long as any of his secretaries can remember. Although now in his late 70s, Littlehorn is a commanding (but unseen) presence across the Wasteland. If good men falter, innocents are slain, or water supplies become more tainted, you can bet Littlehorn's clandestine organization is behind it.[1]

He has four secretaries working for him when you meet him.

Daniel Littlehorn and his associates are the enemies of the Regulators.

If the player character has the Contract Killer perk any good character they kill will have an ear on their corpse. This ear can then be sold to Daniel Littlehorn, located in the scrapyard office, for 15 caps and some XP per ear. He does not reveal why he has contracted the player character or why he requires ears.

Daniel Littlehorn appears only in Fallout 3.

It is possible to render him unconscious and pickpocket him to find an ear, which you can sell to him for caps. The process is repeatable for even more caps. [verified]

Littlehorn at his desk
Add a photo to this gallery