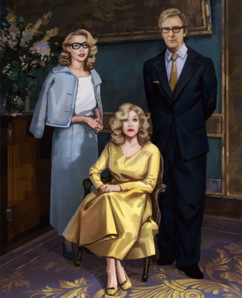 Daniel Hornwright was the CEO of Hornwright Industrial in Appalachia before the Great War.

Daniel Hornwright oversaw the automation of Hornwright Industrial holdings across Appalachia, investing heavily in Atomic Mining Services auto-miners to replace the company's human workforce. In a widely advertised challenge, Garrahan Mining challenged Hornwright to a competition between the auto-miner and the Excavator power armor in a bid to see which was better at mining - a human workforce equipped with Excavator suits or Hornwright's robotic workforce.

Hornwright Industrial won, though not without resorting to sabotage. He was also willing to resort to violence to push his agenda, using robotic strikebreakers to deal with rioting workers[1] and hiring thugs to threaten the daughter of Senator Sam Blackwell, who opposed the automation ballot.[2]

After his wife's death from cancer in 2076, his mental state slowly unraveled as he grew paranoid and obsessed over the completion of his pet project, the Motherlode, even shutting out his daughter and skipping her 29th birthday.[3]

He was also responsible for a proposal to take over control of the town of Monongah in exchange for mining royalties, although the success of that arrangement was short-lived. His family's personal residences included the Hornwright Estate and the Hornwright summer villa. According to his daughter, he is long dead by 2103.[4]

Daniel Hornwright is mentioned in Fallout 76 and in the Wastelanders update.

Retrieved from "https://fallout.fandom.com/wiki/Daniel_Hornwright?oldid=3251664"
Community content is available under CC-BY-SA unless otherwise noted.