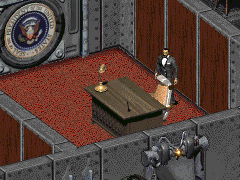 “One word sums up probably the responsibility of any Vice President, and that one word is 'to be prepared.'”

Daniel Bird is the Vice President of the United States and an Enclave executive under President Dick Richardson in 2241.

Bird is described as a small nervous-looking man wearing a food-stained suit.[1] Daniel was a volunteer test subject for an experimental vaccine against FEV Curling-13. It backfired, frying his brain, which has resulted in him spending most of his post-accident time standing idly around in his office and mumbling to himself. President Richardson states that his spelling ability has actually improved.[2] Most of Bird's monologue indicates that he is obsessed with the correct use of spelling and grammar.

Daniel Bird appears only in Fallout 2.

Bird is a direct parody of Dan Quayle, a former U.S. Vice President who served during the term of President George H.W. Bush (1989–93). Nearly all of Bird's dialogue comes from absurd but real Quayle quotes, or slight variations thereof (such as substituting words like "Enclave" into the quotes). President Richardson's comment that Bird's spelling has improved in the time since the experiment that left him otherwise mentally impaired is another reference to Quayle, who famously misspelled "potato" as "potatoe" while in attendance at an elementary school spelling bee in 1992. Also, one can connect his name, as Daniel can be shortened to Dan, and Quayle is a type of bird.

Retrieved from "https://fallout.fandom.com/wiki/Daniel_Bird?oldid=3355016"
Community content is available under CC-BY-SA unless otherwise noted.