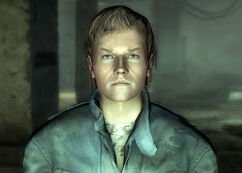 “Unlike some people around here, I stuck with Doctor Li through it all. I was the last one to leave when we finally gave up. Now your daddy shows up out of the blue, and suddenly I have to drop everything to come back and help pick up the pieces.”

Daniel Agincourt is an engineer working on Project Purity in 2277.

This young engineer is rather rude and standoffish, focusing most of his energy on his work for Project Purity. He holds much disdain for James and the Lone Wanderer, viewing them as the cause for the project's indefinite hiatus, and the cause of "impurity" problems. He has no interest nor the time for adventures and fancy plans, he focuses on Project Purity instead. Although a skilled engineer, Daniel lacks decent fighting skills.

Despite his initial rudeness, if the Lone Wanderer later informs him of their father's death, he will apologize for his behavior and display remorse at having been so rude and will show much grief. Another option is to tell him "You better walk away right now," after escaping with Dr. Li and the group. He will reply with "Well, I'm just saying..." with hesitation. This suggests that he is scared of the Lone Wanderer, but yet he still attacks them with standoffish comebacks.

Daniel Agincourt appears only in Fallout 3.

Retrieved from "https://fallout.fandom.com/wiki/Daniel_Agincourt?oldid=3364137"
Community content is available under CC-BY-SA unless otherwise noted.