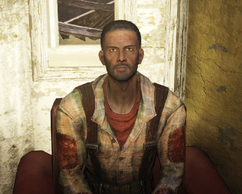 Daniel is a man living in Appalachia in 2103.

Daniel migrated into Appalachia with his family, seeking to rebuild there. He has no interest in "The Treasure of Appalachia," and simply wants a peaceful place to live. When arriving, Daniel and his group were accosted by the Free Radicals to provide food and supplies to them every month. Maggie stood up to the raiders, refusing to cooperate, and Daniel killed her on the spot to preserve the peace. Daniel agreed to personally deliver monthly shipment supplies at their base of operations at the WV Lumber Co.[1]

Once the holotape Agreement with Radicals is found, Daniel can be confronted with the revelation that he killed Maggie. Daniel doesn't back down from his actions and further justifies the murder explaining that Maggie was going to get the rest of the Anchor settlers killed opposing the Free Radicals and was trying to keep his daughter safe.

Daniel appears only in Fallout 76, introduced in the Wastelanders update.

Retrieved from "https://fallout.fandom.com/wiki/Daniel_(Wastelanders)?oldid=3371192"
Community content is available under CC-BY-SA unless otherwise noted.