Missionary
Spiritual leader of the Sorrows 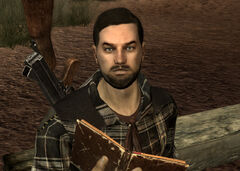 Daniel without his hat

“I'm trying to make amends for allowing our problem to become their problem. The New Canaanites, I mean.”

Daniel is a Mormon missionary in Zion Canyon in the year 2281.

Originally hailing from New Canaan, Daniel used to help the Sorrows with various medical problems and general difficulties, but was sent to Zion as a missionary by Bishop Mordecai to convert those who were willing to the path of God.[1] After witnessing the destruction of New Canaan, caring for the tribals became the focus of Daniel's attention.[2][3]

He is haunted by the death of his bishop, Mordecai, and focuses this energy on making sure the White Legs, or anyone else for that matter, does not bring harm to anyone else.[4][5][6] He especially feels that the Sorrows would not have been subject to the wrath of the White Legs in the first place were it not for the interference of the Mormons.[7] To this effect, he has taught them of God, because without His love they would have nothing.[8] However, Daniel's preaching mixed with the Sorrows' spiritual heritage and the Sorrows' Father in the Cave and the Mormon God became one and the same.[9]

Having witnessed tribes like the Crazy Horns and Tar Walkers suffer and be completely wiped out at the hands of slavers, raiders and exploitative prospectors, he has dedicated himself to protecting them and tending to their needs.[10] He intends to accomplish this by helping the Sorrows evacuate Zion to the safety of the Grand Staircase out of a desire to both remove them from harm's way and prevent them from falling into militancy to defeat the White Legs.[11] Nevertheless, if the White Legs force his hand, Daniel will spill blood to prevent the Sorrows blood from being spilled.[12][13] He fears war with the White Legs would change the Sorrows from what he views as a life of simple innocence into a more warlike culture - the same way of thinking that led the world to ruin, led Joshua Graham to become the Malpais Legate and created men like Salt-Upon-Wounds.[14]

Daniel can only be pickpocketed while he's sleeping.

“Daniel was supposed to be Asian, but for whatever weird reason, somehow his data was switched over to Caucasian (which, in that engine, automatically flips a bunch of face and skin data). This was again done to avoid having it be “two white guys saving Native Americans”. But that’s exactly what it looked like in execution.”— J.E. Sawyer on Tumblr