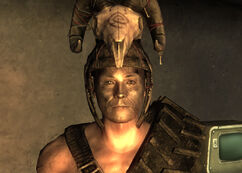 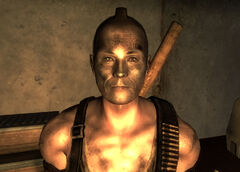 Daniel without his fiend helmet

“Man, are you turned around. Motor-Runner is on the other side of the complex.”

Daniel is a high-ranking member of the Fiends, serving as Motor-Runner's right-hand man inside Vault 3 in the Mojave Wasteland.

A leading member of the gang, he is usually found patrolling the back end of Vault 3's living quarters. He is accompanied by another high-ranking Fiend, who acts as a bodyguard. Recently, the gang had captured four traders who are being detained by Daniel. He possesses the key to their cell.

Retrieved from "https://fallout.fandom.com/wiki/Daniel_(Fallout:_New_Vegas)?oldid=3242397"
Community content is available under CC-BY-SA unless otherwise noted.