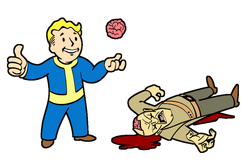 Kellogg and his mother
Fallout 4 achievement/trophy

“Teleportation. Now it all makes sense. Nobody's found the entrance to the Institute because there IS no entrance.”— Doctor Amari

Dangerous Minds is a main story quest and achievement/trophy in Fallout 4.

Lounging around at the Memory DenEdit

After killing Conrad Kellogg, loot the cybernetic brain augmenter to delve deep into his memories. Gather it from Fort Hagen (as part of the previous quest, Reunions) if it hasn't been taken already.

Follow Nick Valentine's advice and locate Doctor Amari. This involves a trip into Boston, through the ruins of the financial district, to the rough-and-tumble fortified settlement of Goodneighbor. Greet the locals, then head to the Memory Den, owned by Irma.

Down in the basement, converse with Doctor Amari. After Nick Valentine volunteers to help out, the Sole Survivor is invited to sit in the lounger to experience snippets of Kellogg's past.

The Sole Survivor wanders through the ethereal strands of Kellogg's memory. Stepping from memory to memory, scenes play out revealing pieces of his life. In most of the memories, various things can be activated to trigger additional monologues, where Kellogg will go into more detail about them.

The memories reveal that Kellogg does indeed work for the Institute, took Shaun from Vault 111, and shows that the Institute uses some kind of teleportation to operate freely. The final scene reveals that Kellogg's current mission is to hunt down a runaway scientist named Virgil, who likely escaped into the Glowing Sea.

There are no monologues in this memory.

Kellogg, Shaun, Institute courser, Dr. Virgil's file (once it's placed on the desk)

Upon conclusion of the final scene, Doctor Amari will instruct the Sole Survivor to interact with the television to leave the memory. Back in the Memory Den, speak to Amari about Virgil.

When leaving the Memory Den, there is an optional conversation with Nick Valentine where he will first seem to have been taken over by Kellogg's memory, only for Nick to seemingly regain control. He will also offer additional advice about hunting Virgil.

This quest branches into an unmarked subquest, Shattered.

Every companion except Curie likes when the memory playback is completed. Curie is indifferent, and Nick is always present for the event to trigger.

“(Kellogg): Turned out I was the only one to ever get these installed. At least that's the story I heard. Some kind of "complications" is all they would say. I suppose they didn't much care if something scrambled my brains. And anyway, by that point I wouldn't have let them take the implants out. I'd come to rely on them too much. Which, looking back, is probably one of the reasons they agreed to it in the first place. Give them some leverage over me.”
“(Scientist): This was my reward for the Vault job. I'd starting getting implants a few years back but only minor stuff. This was the full deal - the cutting-edge tech they didn't usually let out of the lab. I volunteered for everything. I figured I didn't have anything to lose. Besides, this was kind of their thing. Like killing people was my thing. Why not see what they could do for me?”

Kellogg, as a child

Meeting with the Institute

Kellogg and Shaun in Kellogg's safehouse in Diamond City

Shattered icon
Add an image to this gallery
Retrieved from "https://fallout.fandom.com/wiki/Dangerous_Minds?oldid=3250663"
Community content is available under CC-BY-SA unless otherwise noted.