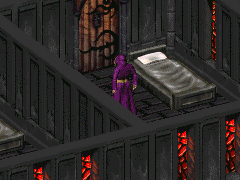 “Do you think that life's supposed to be some pretty picture without any misery in it? Life IS misery! Misery, and whatever the Hell we decide to do about it!”

Found on the second level of the Cathedral tower, Dane is a big, strong, burly man who happens to be clinically insane. Allegedly from the Canadian city of Penticton, he was a prime candidate for conversion into the Master's nightkin army, but following a failed dipping, his mind became permanently unhinged. Subsequent surgeries, indoctrination, and mind-altering chemicals merely spread the marbles even farther out.[1]

In technical terms, he appears to suffer from paranoid schizophrenia and dissociative identity disorder. The latter manifests as two distinct personalities: The harmless Dane and the violent, profanity-spewing Dark Dane. He is highly unstable, repeatedly spouting a string of incoherent, nonsensical dialogue when prompted. Speaking with him on multiple occasions results with fluctuating responses of varying coherence.

Dane spends his time rambling in his room, though he is still technically a high level member of the Children of the Cathedral. Between bouts of insanity he has periods of remarkable lucidity, giving insight into the inner workings of the Unity.

"I know fathers aren't supposed to hug their sons, but I love you, dad!"
"Master, was this what I was supposed to become, Master?"

"What's your favorite color, friend? Mine is milk!"
"You're an idiot, Dane. They're going to kill you soon and you deserve it! Weakling! Weakling!"

"They did it with grace and such aplomb!"
"My name is Dane, it is not Tom!"
"Your poetry sucks, man! It sucks! Sucks! Sucks!"

"I'm crazy. I've gone crazy. Oh my god, I have gone completely nuts! Think about peace! Think about Unity!"
"I want a horse! I need a horse! Bring me a horse, dammit! A horse!"

"You know, I once overheard Morpheus shaking his fist at Nightkin. Or did I smell it?"
"You're fools to cry for me. Never cry over spilled milk . . . or damaged goods."

"Of course they do, idiot! It's your head they can't fix, you son of a bitch!"
"It's the guns, you asshole! Gunpowder is intelligent and evil and controls your brain! The more gunpowder that's near you, the crazier you become! BOOM! BOOM! BOOM!"
" . . . I just want to set the world on fiiiiiiiyaaah!!!"

"They're mutants, you fool! Of course they're strong!"
"So are penguins. And gyro buffalo. They shoot them out of great big bison guns. You gotta watch out for those buffalo women. They'll drop a bison on you so fast, you won't know what hit you! Ha!"

"Of course you know him, Dane, you idiot! (S)He's our enemy! (S)He must be destroyed!"
"Don't mind him, he's an asshole. I love you. Do you love me?"
"I used to live in Penticton, British Columbia. Or maybe I saw it on a map of the old days. Those were good old days. Wish I'd been alive back then . . ."

"Aren't you tired of talking with yourself, you schizo bastard?"
"I hate myself. I want to die, but you're counting on me. Counting on me to say something that makes all of my bullshit mean something! Something important!"
"Why can't I be the important one for a change?"

"'Enough with the brahmin! You'll start smelling like them! Then everyone will just puke!"
"I used to be insane, you know, until I went through the Servitor process. I used to be insane, but now I'm just in pieces. Pieces! Pieces!"
"Son of a bitch, I'm a puzzle! Will you help me put myself together?"

"I think they get the point, asshole! They know the Servitor process screws you! They know this 'baptism machine' just messes . . ."
"My name is Dane. I am a Viking. I like ducks. I rape and pillage! Will you rape and pillage with me?"
"Oh God! Master, not God! At least I remember my own name. At least I still have that. Most of the other failures didn't, before they shot them. Not pretty corpses either. Nightkin target practice!"
"And then there were the ones who lost their minds completely. I wish they were dead."

"What is evil? Evil is when good gets completely screwed up! Evil is when brave people can't be brave anymore! Evil is an anagram of vile! There's got to be a moral standard somewhere!"
"Shut up, asshole! Moral standards! It sure as Hell ain't here!"

". . . zombies are a disgrace to God, you know."
"But why does God make people who break so easily?"
"I think I can finally answer some questions now. Sorry it took so long."

Dane appears only in Fallout.

Dane is not scripted properly and will only display the last line of dialogue. The Review button allows the player to see the entire rant.

Retrieved from "https://fallout.fandom.com/wiki/Dane?oldid=3356204"
Community content is available under CC-BY-SA unless otherwise noted.