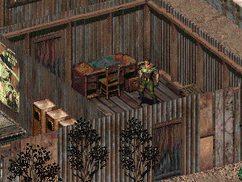 Find the excavator chip
Find out who cut the whore

“If we don't ally ourselves with one of the families in New Reno, you can just kiss Redding goodbye. At least any type of Redding that I'd want to live in.”

"Dangerous" Dan McGrew is the owner of Redding's Morningstar Mine in 2241.

A realist with a strong belief in personal liberty and Redding independence, Dan McGrew is short, but by no means small. He is barrel-chested, with great muscle tone, and a scarred face. The full facial beard and perpetual layer of rock dust on him tell everyone that he is a miner,[1] and a good one to boot. He is the direct rival of Marge LeBarge and Doc Johnson, trying to align Redding with New Reno using the profits he makes from his mine.

Dan's logic is simple: Where NCR would annex Redding and turn it into another of its frontier territories under its laws[2] and Vault City would turn Redding into a labor camp, New Reno's anarchy would ensure that Redding would have autonomy as long as they kept delivering the gold to the city. At the same time, the crime capital would be large enough to keep both the NCR and VC away from Redding. Dan isn't blind and knows that Redding has to choose a master, but it should do so while it can still choose them on its own.

Ironically, the very city he wants to align the town with is the source of his greatest problems. The Mordinos keep bringing in more and more Jet into the city. Half of Dan's miners are more busy looking for a fix than working, which directly impedes his ability to meet the production quotas. He hopes that the excavator chip will help his profit line and ensure his plans come to fruition.

McGrew competes with the other Redding mine, Kokoweef Mine, which is backed by the NCR. The rivalry between the two is at a stalemate, as the control chips for their excavation machines both burned out and they had been digging gold with human hands only.

The owner of Morningstar also cares deeply about his miners. He keeps in touch with them, but never puts their interests above the mine's, as he has to ensure a smooth operation, so that he will be able to make a tidy profit and eventually control enough of Redding to put it under New Reno protection.

Dan McGrew appears only in Fallout 2.

The two head miners names in Redding, Dangerous Dan McGrew and Marge LeBarge, are references to Robert Service poems: The Shooting of Dan McGrew and The Cremation of Sam McGee (who died near Lake Lebarge). Furthermore, the Malamute Saloon is where most of the Ballad of Dan McGrew takes place. This saloon also features a lady known as Lou.

Retrieved from "https://fallout.fandom.com/wiki/Dan_McGrew?oldid=3286764"
Community content is available under CC-BY-SA unless otherwise noted.