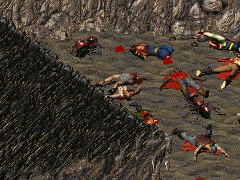 “She's blonde, sexy, and has the most incredible singing voice... I last saw her walking around this area. She didn't like mutants or ghouls, so she wouldn't have been near any of them. Nobody knows where she went. It's like she just disappeared.”— Dan

Dan's wife is a dead woman in Broken Hills underground in 2241.

She was an inhabitant of Broken Hills who hated mutants and ghouls. She got lost and subsequently died, her husband Dan is still looking for her.

Find the missing people for Marcus: Dan wants his wife returned; the Chosen One however finds her dead in Broken Hills underground and can tell that to Dan for good Karma.

It is implied that she was in fact murdered, along with several other people, as part of a plot to frame Jacob, leader of the anti-mutant conspiracy.[1]

Dan's wife appears only in Fallout 2.

Retrieved from "https://fallout.fandom.com/wiki/Dan%27s_wife_(Fallout_2)?oldid=3282427"
Community content is available under CC-BY-SA unless otherwise noted.