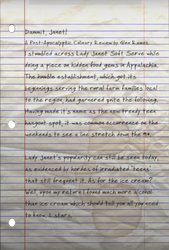 Dammit, Janet! is a paper note in Fallout 76.

The note can be found on the counter next to the cash register at Lady Janet's Soft Serve.

I stumbled across Lady Janet Soft Serve while doing a piece on hidden food gems in Appalachia. The humble establishment, which got its beginnings serving the rural farm families local to the region, had garnered quite the following. Having made it's

name as the new trendy teen hangout spot, it was common occurrence on the weekends to see a line stretch down the 94.

Lady Janet's popularity can still be seen today, as evidenced by hordes of irradiated 'teens' that still frequent it. As for the ice cream? Well, upon my return I found much more alcohol than ice cream which should tell you all you need to know. 2 stars.

Retrieved from "https://fallout.fandom.com/wiki/Dammit,_Janet!?oldid=3173077"
Community content is available under CC-BY-SA unless otherwise noted.