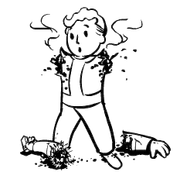 Damage is a measurement of how harmful an attack is to a character. When a character takes Damage, it is subtracted from their Hit Points. Damage will cause death when a character's hit points reach 0.

Weapons all have base damage values. The final damage delivered to the target, can be possibly modified by various factors, depending on the game:

There are different types of damage, depending on the weapon of attack:

^ a Not shown in the games that use it, Electrical damage is only caused by alien blaster, YK32 pulse pistol, and YK42B pulse rifle.
^ b Fallout 3 and Fallout: New Vegas use "energy" damage to label the residual effect off the Tesla cannon, though it has the appearance of electricity sparking.
^ c All Fallout games contain environmental radiation damage of some variant. The table is representative of radioactive damage dealt by weapons like the gamma gun.
^ d Exists in the game files, but is not used anywhere.
^ e Also known as physical damage in Fallout 76.
^ f In Fallout 76, it is used only by the Electrically Charged mutation, but calculates using energy resistance. This effectively makes it energy damage, but grants special immunity to certain effect interactions.
^ g In Fallout 4 and 76, explosive is not its own damage type, rather it is a damage sub-type. Explosives are a way to deal proper damage types. For example, a missile launcher will create an explosion that deals physical damage, while a plasma grenade will create an explosive that deals both physical and energy damage.
^ h In Fallout 4 and 76, bleed damage is not its own damage type, rather it is a damage sub-type. Bleed damage will deal physical damage, but is exempt from being reduced by damage resistance.

The computation formula of the final damage for each game is described in more detail in this article.