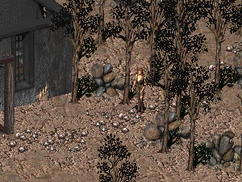 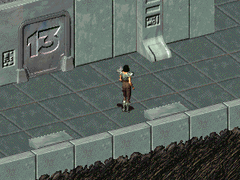 “I don't give a radrat's ass... I'm sorry. I'm just a gun who was hired to stand here and guard this trail. Other than that, I don' know what's going on around here. I had a daughter once, though, and...yeah, some guy went by here. I let him through because he knew the proper sign...just like the sign you gave me. Go on. I'm outta here.”

Dalia is a henchman of Darion, the leader of the Khans in 2242.

A pretty woman with a keen awareness of her surroundings,[1] she is posted near the Vault 15 as a guard and allows people with a proper sign. After leaving the Squat, one night she was camping and she heard the deathclaws talking. They found her, took her to Gruthar and she lived in Vault 13 since.

Rescue Chrissy: Dalia allows the Chosen One to go by her in their search for Chrissy and, fearing reprisal, flees the Squat and dyes her hair black. After leaving the Squat, Dalia wanders the desert until one night, she sees a campfire.

Dalia appears only in Fallout 2. Like all of the other residents of Vault 13, Dalia will be killed by the Enclave.

Retrieved from "https://fallout.fandom.com/wiki/Dalia?oldid=3261837"
Community content is available under CC-BY-SA unless otherwise noted.