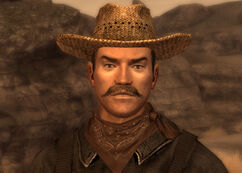 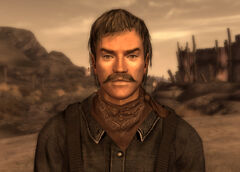 Dale without his hat

“Between having to hire protection and getting slapped with taxes, it's more profitable to stick to Arizona and New Mexico. But, I do cross the river from time to time when an opportunity comes along.”

Dale Barton is a roving trader and a supplier for Caesar's Legion, living at The Fort in 2281.

Barton is an independent caravan merchant, and the main supplier for Caesar's Legion. He prefers to trade in Legion territories versus NCR territories, saying that he finds it cheaper and safer. This is due to Caesar not demanding (or needing) heavy taxes from traders in his territory and the Legion's effectiveness in keeping the trade routes secure from both raiders and creatures roaming the wastes. When asked about Legate Lanius, he mentions Lanius killing one of his brahmin just because it got in his way, though he goes on to say that he had enough sense to keep quiet and not seek reimbursement from Caesar.

Dale is the one who salvaged a howitzer from a military base in Yuma, Arizona and then sold it to Caesar's Legion. He has a large selection of items and regularly updates his wares.

Effect of the player's actionsEdit

He will neither trade nor engage in dialogue with the Courier if they have a poor reputation with the Legion.

When you buy three or more caravan cards from Dale, the game will freeze. It may require a restart or may unfreeze after a time. [verified]

Retrieved from "https://fallout.fandom.com/wiki/Dale_Barton?oldid=3173541"
Community content is available under CC-BY-SA unless otherwise noted.