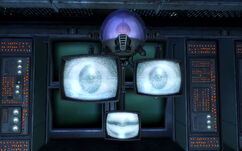 Old World Blues
Picking Your Brains
Welcome to the Big Empty
Coming Out of Her Shell
He Came... And Went

“You are an unusual specimen, to so boldly... walk into the mighty expanse of the Think Tank. Fearless and proud as a teddy bear.”

Doctor Dala was a pre-War scientist operating in the Think Tank in the Big MT in 2281.

Doctor Dala was the first head chief researcher of mineralogy who became a think tank to continue her work at the Big MT, such as studying Saturnite. When the Courier meets her, she is the head researcher on humanology and lobotomites, and has 211 doctorates from mineralogy and humanology to medicine and holotape eidetics.

Dala has an arguably unhealthy fascination with the human body. It would seem she has pent-up sexual frustrations (though she would never admit such as accusation to her Think Tank peers) and she can only find release in examining living tissue or observing various physiological actions. Other members of the Think Tank refer to Dala's collection of formography — explained as obsession with the human body — as if it were a hoard of fetish material.[1]

Shortly after the war, all of the think tanks, along with Dala, went insane. Doctor Mobius replaced her and her colleagues' pre-War memories and names with that of their new eccentric counterparts, trapping them forever. This explains her extreme obsession with the human body and supposed 211 doctorates in sciences which do not exist. Mobius then fled to the Forbidden Zone where he likewise went insane.[2]

As long as the player completes "Coming Out of Her Shell" before confronting the Think Tank at the end of Old World Blues, she will side with the Courier if the option to have Klein consult with his colleagues is taken.

It is possible that you won't be able to initiate another "Breathing Session" with Dala after you have already done so once before. [verified]

Retrieved from "https://fallout.fandom.com/wiki/Dala?oldid=3460426"
Community content is available under CC-BY-SA unless otherwise noted.
... more about "Dala"
RDF feed
Has platform
PC +, Playstation 3 +  and Xbox 360 +