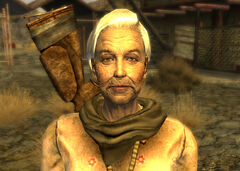 Daisy without her cowboy hat

“I never was happier than when I was in the cockpit. I was able to go just about anywhere and everywhere, limited only by the fuel I could carry.”

Daisy Whitman is a former Enclave vertibird pilot living in Novac in 2281.

An Enclave veteran and citizen, back when the oil rig and Navarro were still flying familiar colors, Daisy was a pilot assigned to a squad under the command of Captain Judah Kreger. Piloting the great flying machines left an indelible mark on her personality, becoming her truest passion. Being in the Enclave mattered little, what was important was being able to taste freedom while airborne. She loved it so much that she was willing to risk her standing by taking the scenic route back to Navarro each time she flew on a mission.[1] Out of 71 mission, she suffered only one Vertibird loss, barely walking away from a crash in Klamath that claimed the lives of her two fellow crew members.[2] Out of these 71, a dozen were flown for Gannon, Arcade's father, including the one where he fell in combat.[3]

Her career ended when the Chosen One destroyed the oil rig in 2242 and Navarro fell to the New California Republic. Judah Kreger, Orion Moreno, Cannibal Johnson, Arcade Gannon, and his mother fled. Daisy kept in contact with Arcade, becoming like a mother to him after both ended up settling in the Mojave Wasteland.[3] She found a measure of happiness as a scavenger and by 2281 is living in Novac, helping prospectors take apart engines and isolate parts worth reselling.[4] She still misses her time in the air,[5] and would give everything to fly just one more time, even if she might wind up on the bottom of Lake Mead.[6]

Daisy is able to detect the player character from anywhere in her apartment, even when she should not be able to, such as while sleeping, facing the other direction or in a different room. However, it may still be possible to steal some items by crouching and almost simultaneously stealing the item.[verified]

Daisy in the ending slides