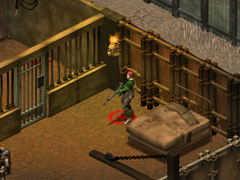 “Hmmm. Some fine looking bucks in your group stranger. I might have to keep one or two of you as personal slaves. We'll see how well you ride!”

Daisy-May Gomer is one of four main leaders who control the raiders in the region of Chicago in 2197.

Daisy is killed by the Warrior and his team during the Rock Falls mission. It is said than all Raiders bodies, including Daisy's, were later recovered by the Brotherhood and displayed around the region in crucifixion, to discourage anybody to follow their path.

Her name is a reference to Daisy Duke, one of the Duke family members from the early 80-ties television series The Dukes of Hazzard.