Fallout Wiki
Register
Don't have an account?
Sign In
Advertisement
in: Verification needed, Fallout 76 gameplay, One Wasteland For All
English

Daily Ops is a PvE game mode in Fallout 76, introduced in the One Wasteland For All update. Using the game's instancing technology, Daily Ops aim to provide challenging, randomized and repeatable dungeon-clearing missions for experienced players. Daily Ops rotate every day at 1:00pm EST.

“With Daily Ops, we're aiming to bring more repeatable and challenging content to the game that you can jump into on a regular basis, which has been highly-requested by some of our more experienced players.”— Inside the Vault; September 11, 2020

Daily Ops take place in an instanced dungeon, randomized each day. They can be completed solo or with teammates in groups of up to four. If the mission is successfully completed, the participants will be rewarded according to their completion time. The operation is repeatable, though certain rewards may only be available once per day.

The objectives, locations, enemies and their mutations are randomized each day. Enemy mutations are powerful effects, exclusive to hostiles in Daily Ops, which have a significant impact on gameplay. Some mutations cause enemies to always detect sneaking players, while others grant healing abilities.

The narrative of Daily Ops is light on the details but heavy on the action. Players complete various jobs for Vernon Dodge, a member of Appalachia's original Brotherhood of Steel, while he chats over a radio. Although Daily Ops are introduced into the plot during the quest Breaking Radio Silence, completion of the quest is not a requirement in order to join Daily Ops.

Every aspect of Daily Ops is randomized to provide a unique, dynamic experience. On one day, players may be hunting down exploding Mothman cultists with armor penetrating attacks in order to deactivate signal interceptors around the Burrows. The next day may require players to set up uplinks around Watoga High School and survive a constant stream of fast-moving Scorched with automatic detection.

The second expansion brought the total number of possible combinations to 980 for regular Daily Ops, and introduced Double Mutation Weekends which offer 1,120 combinations.

Each enemy gang encountered during a Daily Op will feature a powerful boss enemy near the conclusion of the mission. They have a large amount of HP and carry unique and dangerous weaponry.

Double Mutation Weekend community events are special, more challenging Daily Ops featuring enemies with a unique combination of two different Mutations - for a total of three. These Ops will typically be available every other weekend, from Thursday to Monday (1:00 PM EST).

These events offer additional incentives and rewards for the first and all subsequent Daily Ops playthroughs:

Daily Ops will provide greater rewards if they are quickly completed, detailed in the after-action report. There are three tiers based on completion time, each offering its own pool of rewards.

Note that attaining a higher tier will reward items from lists of all previous tiers, provided those tiers weren't already earned. For example, earning "Elder" rank on the first Op of that day will reward all 3 pools - Initiate, Paladin, and Elder. The rare Daily Ops item[1] rewards may only be obtained once each per day. Following the release of Steel Reign, completing a Daily Op for the first time within Elder par time unlocks an achievement/trophy.

Note: Items marked with * may only be received if that plan has not already been learned. 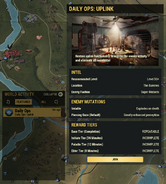