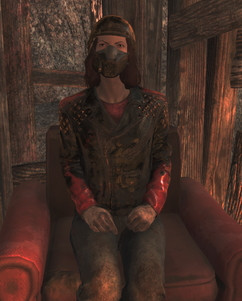 Dagger's lieutenants are three Blood Eagles serving under Dagger in Appalachia in 2103.

Dagger's lieutenants are high-ranking Blood Eagles that operate as Dagger's guards. They are encountered when the Vault Dweller is sent to retrieve The Retreat's supplies and the Brotherhood's stolen weapons. The first one, clad in full raider power armor, attacks as soon as the throne room door is approached, while the other two protect Dagger herself.

Disarming Discovery: Two are with Dagger in her throne room deep in the Dagger's Den; flanking both sides of the lower sections. While initially friendly, depending on the conversation with Dagger, her lieutenants become hostile.

Dagger's lieutenants appear only in Fallout 76, introduced in the Steel Dawn update.

Power armored lieutenant
Add a photo to this gallery

Retrieved from "https://fallout.fandom.com/wiki/Dagger%27s_lieutenant?oldid=3422755"
Community content is available under CC-BY-SA unless otherwise noted.