Helps Friends and Allies
“Because you've impressed me by taking out my crew, I'll allow you to say a few last words. Choose them carefully, kid.”

Dagger is a member of the Blood Eagles in Appalachia and the leader of the eponymous Dagger's Den.

After arriving in Appalachia, Dagger chose to remain independent of the raiders at the Crater for three reasons: first, she refused to be subordinate to someone else; two, they draw too much attention to themselves; and three, she does not want to deal with the Settlers at Foundation.[1] According to her, she was not initially trying to start her own gang, but was tough and fearless enough that people just started to follow her. In fact, she claims, losing her raiders doesn't even worry her since more will come and join up.[2] At some point, she found a group of raiders that had somehow acquired weapons that originally belonged to the Brotherhood of Steel. After "negotiations" failed, she took possession of the weapons.[3]

When the villagers settled in the treehouses of the Retreat, Dagger sent some Blood Eagles to pretend to want to join the group in order to spy on them. Once the villagers became more established and had a decent stockpile of supplies, the spies returned to Dagger. The next day, Dagger showed up and demanded some of their supplies.[4] Since then, Dagger has been demanding weekly collections from the villagers[5] and has been increasing her demands steadily in the hope they die off and she can claim the Retreat for herself.[6] According to her, she chose to extort them because they are weak and incapable of defending themselves yet have plenty of supplies[7] and are led by a woman who is a "sickeningly sweet"[8] "pacifist."[6]

Disarming Discovery: Dagger has been both harassing villagers of the Retreat as well as hording stolen Brotherhood weapons. For these reasons, she must either be bribed using 300 caps, intimidated using a Strength 12+ check, or outright killed. Flirting with Dagger does not work. Dagger will turn hostile and attack if the Vault Dweller says her reward is a sense of peace and a good night's sleep.

Dagger appears only in Fallout 76, introduced in the Steel Dawn update. 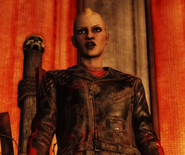 Dagger as she appears in the Steel Dawn trailer

Dagger on her throne

Dagger dead with a key on her