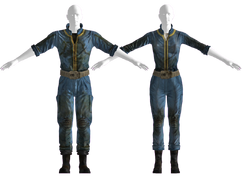 Dad's wasteland outfit is a piece of clothing in Fallout 3.

One way to acquire this item is to reverse-pickpocket James either while he is talking with Doctor Li, or while he is standing in the Jefferson Memorial rotunda.

Another way is by standing directly in front of the airlock door in the memorial rotunda right after James' death, directly in front of his body. It can be accessed by slowly looking around until "Search Dad" comes into view. This only works if his body has fallen close to the door. It can also be done with Colonel Autumn, who at the time will have 10mm rounds, his uniform, and his pistol.

This piece of clothing has a tendency to spin around in the air slowly when picked up and held. It will continue to spin until it is dropped. This can be particularly frustrating if trying to display it in the Megaton house. [verified]