“Hsst! What trickery is thisss? No! It cannot be! You foolsss! She cannot be trusssted! You have doomed usss all!”

Emperor Daarr was the leader of the Beastlords in 2197, whose seat was in the cave labyrinth of Mardin.

Daarr was the oldest and strongest surviving member of the original mutated strain of humans. He had the greatest influence on the ability of his fellow Beastlords to control their creatures. However, the greatest of his achievements was an ability to control deathclaws, using the captured deathclaw matriarch.

Daarr was a large, sweaty man in his early forties. He spoke with a hissing lisp that seemed to follow those of his clan. He was mentally ill.

Daarr gibbered to himself, talked to imaginary advisers, and left tooth-marks on the furniture. His tactics seem to be 'divinely' inspired, with an equal chance to hit or miss. He was killed when the Warrior came for him in Mardin.

Daarr appears to be wearing some sort of clothing made up of hairy deathclaw fur, human skulls and metal pauldrons. He wears a deathclaw skull as a helmet. All of this is part of the character model rather than being an actual piece of clothing.

Daarr appears only in Fallout Tactics. 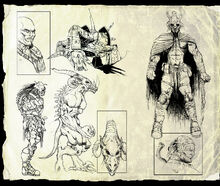