An extensive transit network, providing service to Washington, D.C., and surrounding areas. The network of stations and rail lines were advertised as a faster, more convenient, cleaner commuter option.[1]

By 2277, DCTA metro stations are closed off with chain-link fences and warnings to keep out.[5] Metro tickets can be found and will be recognized as valid by functioning Protectrons, while downloadable DCTA Metro maps provide overviews of the metro network, some of which still have power.

The DCTA appears only in Fallout 3. 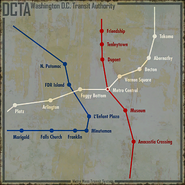