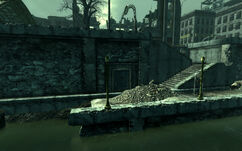 The DCTA tunnel 014-B Potomac is an unmarked location part of the Metro system under the Capital Wasteland. It is inhabited by several mirelurks.

This metro system consists of a higher northeastern area, with metro tracks and several stranded metros and a lower southwestern area with small passage ways, which have run underwater.

In the southernmost chamber (lying on an instrument panel) is a D.C. Journal of Internal Medicine, guarded by a player level dependent mirelurk.

DCTA tunnel 014-B Potomac appears only in Fallout 3. 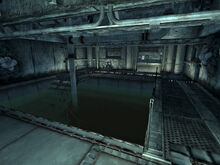 D.C. Journal of Internal Medicine
Add an image to this gallery
Retrieved from "https://fallout.fandom.com/wiki/DCTA_tunnel_014-B_Potomac?oldid=3085104"
Community content is available under CC-BY-SA unless otherwise noted.