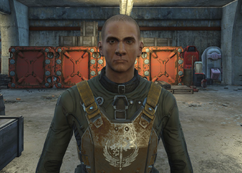 Initiate D. Clarke, ID number CL-312I, is a Brotherhood soldier at the Boston Airport. He is part of the BOS logistics division led by Knight Sergeant Gavil in 2287.

Initiate Clarke joined the Brotherhood of Steel roughly the same time as Knight Lucia. The two were part of the Brotherhood for at least two years before 2287 and were friends. However, shortly after the battle to take over the Boston Airport, Clarke started to become more reclusive and distant and started to adopt strange habits, such as searching through Lucia's personal belongings. He was then assigned to logistics and kept count of supplies alongside Lucia. At the same time, supplies, specifically food, were being reported as missing without reason.

It is later revealed that Clarke himself is taking the food crates and bringing them to a feral ghoul infested region of the Boston Airport, and feeding the ferals, in an attempt to not only prevent the ferals from attempting to attack the nearby base but also to show compassion to the ferals.

He does this in response to what happened to take control of the airport, as he viewed the killing of these former human beings, even when they were running away, as slaughter. The Sole Survivor, investigating the missing supplies, discovers this and is allowed to decide Clarke's fate. Either they can tell Clarke to run from the Brotherhood to evade punishment, pass a moderate Charisma check and tell Clarke to accept blame for the missing supplies or kill him outright.

He can later be found incarcerated at Cambridge Police Station if successfully convinced to turn himself in. If he was told to flee he can be encountered randomly in the wasteland being chased by feral ghouls. If saved he will berate the Sole Survivor for killing them.

If he was convinced to turn himself in, but the player character sides with the Railroad, he can be released while on the mission Precipice of War, will not be able to be engaged in conversation, and will say that he doesn't understand what's going on.

Duty or Dishonor: The Sole Survivor has to find Clarke and confront him, either by speaking to or killing him.

D. Clarke appears only in Fallout 4.

Retrieved from "https://fallout.fandom.com/wiki/D._Clarke?oldid=3178351"
Community content is available under CC-BY-SA unless otherwise noted.