Cleansing the Commonwealth
Kidnapping
Lost Soul
Reclamation
To the Mattresses

Fallout 4
“Seniors, a reminder that you must be 18 or older to attend the Army recruitment seminar during second period.”— PA system

D.B. Technical High School is a location in the Theater District of Boston in 2287. It is east of Wilson Atomatoys corporate HQ and south of the Combat Zone.

The building has three levels, including the basement, first floor, and second floor, with raiders filling the halls and rooms. There are also a few traps, such as bottlecap mines and machinegun turrets. The basement in particular holds quite a bit of notable loot, and is the home of the raider boss Bosco.

In the basement, to the east of the swimming pool room is a metallic door that connects to the generator room in Medical Center metro. There is a barred pair of rooms (one door is barred, the other is chained) on the first floor near the main entrance that can be accessed by falling through a hole in the floor on the second floor. It is also possible to shoot the bar on the back of the barred door through an opening in the wall just past the chained door on the right when approaching from the main entrance. Inside the western room is an Advanced-locked safe and a Novice-locked ammo box. The roof features a few remaining raiders and an explosives box on a fire escape on the eastern side.

Killing Bosco doesn't yield XP, despite the fact that he is a leveled opponent (player level x 1.2).[verified]

Statue in the courtyard

Stealth Boy on the second floor, in between two lockers 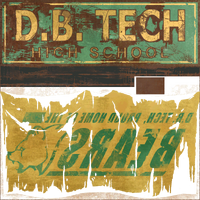