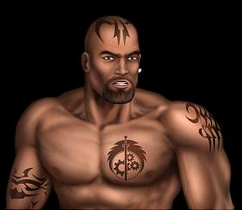 Cyrus is a possible player character in Fallout: Brotherhood of Steel.

Cyrus grew up in a small, semi-tribal farming community, weathering the usual wasteland hazards of raiders, radscorpions, and the like. It was finally devastated by the mutant army when Cyrus was just a boy, who wandered, like many of the adrift-in-the-wilderness youths, here and there, hearing stories about the defeat of the mutant army and the forces that opposed them. Eventually finding his way to the doors of the Brotherhood of Steel, Cyrus requested a place within their order, and has been sent out on an initiation to test his resolve, his determination, and his value as one of their own.[1]

As the largest and strongest of the three, Cyrus is able to wield some of the game’s biggest and heaviest weapons. Not as light on his feet as the other two, Cyrus makes up for lack of quick movement with increased vigor and strength.[1]

Concept art by Jeff Jumper
Add an image to this gallery

Retrieved from "https://fallout.fandom.com/wiki/Cyrus_(Fallout:_Brotherhood_of_Steel)?oldid=3094194"
Community content is available under CC-BY-SA unless otherwise noted.