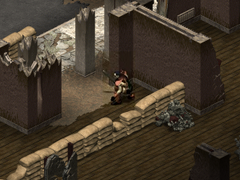 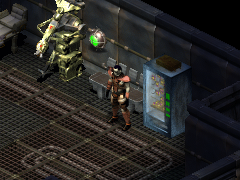 “Where the fuck did you come from? ALARM! ALARM! Intruders!”

Cypher is the Brotherhood of Steel's spy in the raider camp of Freeport in 2197.

Cypher isn't a member of the Brotherhood, but he is sponsored by them in exchange for information. Cypher is a greasy, shifty-eye looking character who fits in well with any bandit or raider camp. He has a knack for blending into the crowd as long as they are bloodthirsty marauders. Taking the average wastelander into account, Cypher is practically invisible.

Cypher appears only in Fallout Tactics.

It seems likely Cypher is a reference to his namesake in the first Matrix movie - (Lu-)Cypher is a spy and a traitor working for the Agents to bring down the Matrix hackers, and almost succeeds.

Retrieved from "https://fallout.fandom.com/wiki/Cypher?oldid=3326355"
Community content is available under CC-BY-SA unless otherwise noted.