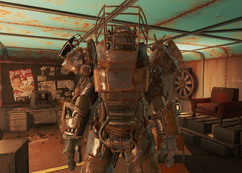 Cutty is the leader of the raiders established inside the Poseidon Energy plant located in the Commonwealth in 2287.

Cutty is a raider leader in power armor. He led his band of raiders to the energy plant and made it their stronghold.

Cutty may have some relations with Glory, as her name is written in the room they are spawned in, along with several question marks.

Cutty appears only in Fallout 4.

Retrieved from "https://fallout.fandom.com/wiki/Cutty?oldid=3127534"
Community content is available under CC-BY-SA unless otherwise noted.