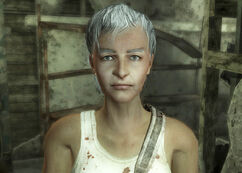 “You're a mess. I hope you brought a lot of money with you.”

Cutter was born in 2236 in the pens as a slave. She spent her youth learning wasteland medicine from her mother. When her mother passed away, Cutter took over the caretaker duties for the slaves but slowly grew bitter and frustrated with their inability to fight back against the slavers. Spending nearly a decade trading her services, she earned enough caps to buy her freedom. Since Paradise Falls needed a skilled medic, she stayed, taking wealthy slavers for all she could. She can be found at the clinic.[1]

Cutter appears only in Fallout 3.

Retrieved from "https://fallout.fandom.com/wiki/Cutter?oldid=3443235"
Community content is available under CC-BY-SA unless otherwise noted.
... more about "Cutter"
RDF feed
Has platform
Playstation 3 +, Xbox 360 +  and PC +