Curtis Wilson was a BADTFL agent assigned to investigate the Appalachian Free States movement prior to the Great War, alongside local sheriff Scott Darcy.

Before his assignment to investigate the Free States, Wilson was known publicly for busting a firearms smuggling ring near the start of 2075.[1] During Wilson and Darcy's investigation, the two discovered a conspiracy which originated from the government itself, leading Wilson to quit his job to continue his investigations.[2]

As part of the investigations, Wilson looked into local Vault-Tec University student Shelby O'Rourke whom he encountered while she was setting up a thesis study into local cryptids. Although an initial background check revealed nothing of suspicion, Wilson noted her determination to find proof as a potential asset in the future,[3] given the other investigations he was undertaking.[4] Among this, Wilson became involved in the studies of the Mysterious Guidestones with Jacquelyn and Professor Michael Blake, recording the investigation on his terminal.

Both Wilson and Darcy survived the bombs and the event led to doors opening which were previously shut. Before the two could finish their investigations, Scott Darcy turned up dead under suspicious circumstances. This led Wilson to lock down his terminal and go into hiding until the time was right for him to emerge with his findings.[2]

According to the cut Huntersville holotape, Wilson and Darcy infiltrated the Huntersville quarantine zone on December 14th, 2076 and saw what had become of the residents, some of Appalachia's first super mutants. They stole documents detailing West-Tek's involvement, including a computer password belonging to Doctor Elias Khan, before an Army officer discovered them, causing the pair to flee and drop the holotape.

Curtis Wilson is mentioned only in Fallout 76. 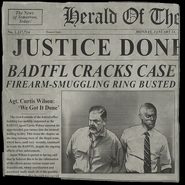 Complete newspaper photo
Add a photo to this gallery

Retrieved from "https://fallout.fandom.com/wiki/Curtis_Wilson?oldid=3409502"
Community content is available under CC-BY-SA unless otherwise noted.