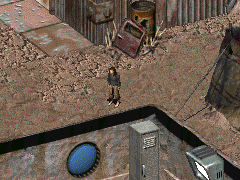 Curtis is a small brown-haired child in the Vault City courtyard.[1] He has lost his Mr. Nixon doll and is quite upset about it.

Curtis appears only in Fallout 2. Just like all other children, he is censored from European editions of the game.

Retrieved from "https://fallout.fandom.com/wiki/Curtis_(Fallout_2)?oldid=3407335"
Community content is available under CC-BY-SA unless otherwise noted.