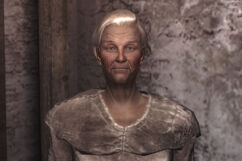 “Thank you for choosing wisdom over violence.”

Mother Curie III is the leader of a small cult living in the Holy Light Monastery in Springvale in 2277.

Curie was a former Child of Atom and Megaton local who took Megaton's entire Aqua Pura shipment and began irradiating it and distributing it as "holy water" to fulfill her perceived religious calling to spread radiation. In the basement of her newly adopted home, she preaches to a pair of ghouls, and in the lower part of the basement, she stores vast amounts of Aqua Pura along with a pair of tame feral ghouls: a feral ghoul reaver named Atom's Champion and a glowing one named Sun of Atom.

Mother Curie III appears only in the Broken Steel add-on for Fallout 3.

Mother Curie III's name is a reference to Dr. Marie Curie, the discoverer of radiation and two radioactive elements, who eventually died of radiation poisoning.

Retrieved from "https://fallout.fandom.com/wiki/Curie_III?oldid=3469885"
Community content is available under CC-BY-SA unless otherwise noted.