Prior to the Great War, the "Mothman" was a mythical creature in local Appalachian folklore that was described as a terrifying half-man, half-moth hybrid that stalked the area around the town of Point Pleasant.[1] The story of the Mothman was sensational enough to create a wide following, ranging from cryptid hobbyists to aggressive conspiracy theorists hellbent on uncovering the deeper mystery of the creature. The Mothman's legend lead to a number of tourist attractions, such as the Mothman Museum in Point Pleasant. Stories and other popular fiction were sold as novelty holotape recordings.

Despite its local fame, interest in the Mothman was generally insignificant and it was not seen as worthy of genuine inquiry by the scientific community.[2] However, while the legend of the Mothman was seen by most as a simple folktale, a serious clandestine following of the creature eventually began to emerge: the mysterious Cult of the Mothman. Its followers, fervent in their worship of the Mothman as a divine being, practiced numerous rituals and established many hidden shrines that can still be found all over post-War Appalachia.

The cult itself has existed in secret since long before the Great War, viewing the Mothman as a way to predict the future, and frequently attempted to summon him to do as such.[3][4][5] They also sought out the creature in order to obtain blessings, as well as immortality and divinity.[6]

On October 22, 2077, only a day before nuclear Armageddon was unleashed across the world, the cult conducted a ritual to summon the Mothman. One member identified as Brother Charles claimed that the ritual succeeded and that the Mothman had warned him of a terrible flood that would occur the next day, which could only be survived by reaching high ground. The cult took this warning seriously and informed its other members.[3][7]

However, Charles alone received a vision from the purple-eyed wise mothman who guided Charles and his followers to the safety of the Lucky Hole Mine instead.[8] After Charles shared his experience with the other cultists, this apparently splintered the cult, with some choosing to stand upon the rooftops of Point Pleasant the following morning, while others followed Charles to the mine. In the end, the followers who followed Charles to the mine survived the apocalypse.

After entering the mine, the group constructed numerous shanty housings and shrines throughout. It appears that the group deviated from worshiping the original deity of the Mothman, as evident from the numerous holotapes of Jeff Lane that can be found in Point Pleasant and Lucky Hole Mine. He described the Mothman as a "creature" but expressed a desire to seek out the hidden horrors of his mind.[9] This came to fruition with "the Interloper," who contacted Lane and others in the Lucky Hole Mine through some sort of telepathy, luring them deeper into the mine to find him. At this time, Lane expressed himself as a "vessel" for the Interloper.[10] Those who refused to worship the Interloper became a splinter sect called the Enlightened and they would eventually leave West Virginia and settle at a church known as the Lantern, leaving the "Dim One" red-eyed Mothman worshippers in Appalachia. For years, the cultists explored Appalachia, building shrines in all regions except for the Cranberry Bog. The "Dim Ones" eventually left Appalachia or died there with their remains as evidence.

However, by 2103, the "Dim Ones" returned en masse and thrived in Appalachia, their self-proclaimed holy ground, driving out or otherwise destroying those that would oppose them or their beliefs.[11] Settling around the region, including Point Pleasant, Clancy Manor and Kanawha County Cemetery, the Cult of the Mothman grew once more. One cultist mentioned that their return was partially motivated by the search for a deceased entomologist by the name of Dr. Wallace, who had written their doctoral thesis on the moths of the Appalachian region.[12][13]

During the seasonal Equinox, members of the Enlightened return to Point Pleasant in honor of the purple-eyed Wise Mothman, while the Dim Ones try to interfere.

The Cult of the Mothman is very primitive in nature, using a combination of wood, bones, wire, leather, vines, and cloth to construct their armor and shrines. For weaponry, the cultists prefer melee weaponry, using scraps of metal and black titanium to construct blades and crudely fasten them to different parts of a deer bone and/or antlers as handles.[14]

Their base construction consists of utilizing pre-existing structures and modifying them with bones, vines, wood, and otherwise to create shelters and altars. Cultist structures can also include the bones/ribcages of large creatures, similar to the bones found underneath the waters in the Big Maw.[15]

The cult maintains shrines and resides or used to reside in various locations throughout and beyond Appalachia, including:

A friendly splinter faction, which worships the purple-eyed wise mothman.

A splinter group that worships the Interloper, or the Firstborn of the Wood. Following visions received by Jeff Lane, they were led by the high priestess to the Lucky Hole Mine. As the First Priestess of the Wood, she led the group's religious prayers in the short-lived sanctuary.[17]

Sites of the cult's influence can be found across Appalachia, especially in regions such as the Forest and the Mire. The sites themselves can be as small as unmarked thickets with ritual totems and corpses, to as large as the labyrinthine depths of the Lucky Hole Mine.

The ritual bindings and ritual mask are clothing items of the cult's make, and can commonly be found in areas of their influence. The cultist dagger and cultist blade are weapons of similar origin.

The cult makes a return in the Wastelanders update. The cult can be found in Point Pleasant but also wandering around Appalachia and will attack the player character on sight. There is no known way to join the cult.

When killed, the cultists speak their last words, asking the Mothman to take them to his paradise, saying things like "I go to the divine light," "The divine light...I can see it," and "I regret nothing." If able to eavesdrop on cultists while they are praying, they can be heard asking the Mothman to give them its strength, punish the non-believers, and come to save them when the day of reckoning comes.

The Enlightened refer to members of the other sects as the "Dim Ones."

The Cult of the Mothman only appears in Fallout 76. In the launch version of the game, they were only mentioned or appeared as corpses. In Wastelanders, they were expanded to become human enemies. The lore of the cult was expanded on in the Night of the Moth update.

The Cult of the Mothman in the Atomic Shop 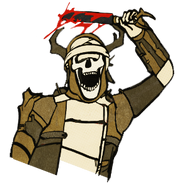 A cultist, as shown on the Blood Sacrifice! perk card 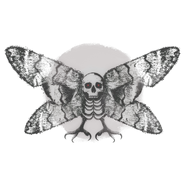 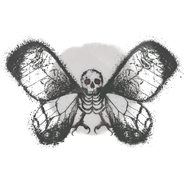 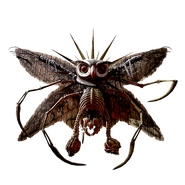 A painting drawn by a cultist

A group of cultists praying in the Lucky Hole Mine

Cult shrine in the Savage Divide

Cult shrine in the Savage Divide

Sunken church in the Mire containing the cult altar

Altar in the sunken church

Altar in Helvetia church with raider corpse laying behind the pulpit

Closer up of blood-stained altar in Helvetia church

Entrance bridge in 2103 in Point Pleasant

The bridge to Point Pleasant

A blood trough on a roof in Point Pleasant

Room built in entrance to the Silver Bridge

A figure at the Silver Bridge, also seen in the Interloper's room

The church in Helvetia