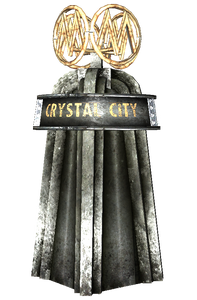 Crystal City is a district of Washington, D.C. in the Capital Wasteland in 2277. Cut from the final version of the game, its only remains are the signposts of the Crystal City Metro station(s).

Crystal City was going to appear in Fallout 3 but was cut from the final version of the game.

Retrieved from "https://fallout.fandom.com/wiki/Crystal_City?oldid=3102751"
Community content is available under CC-BY-SA unless otherwise noted.