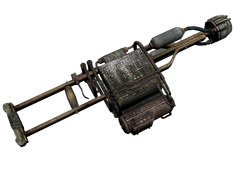 The Cryolator is a weapon cut from the final version of Fallout 3.

Several junk items possibly related to the Cryolator were also cut; a coolant component (which forms the midsection of the Cryolator) and a liquid nitrogen canister (which was possibly intended as ammunition) are two. Both of these items use the same texture file as the Cryolator.

The Cryolator and the possible components mentioned above do not exist in the game (except for the crutch used for the stock and the weapon's base), nor do they exist as unused items in the G.E.C.K. editor. However, the meshes and textures for them and the weapon itself are contained within Fallout 3's BSA files. 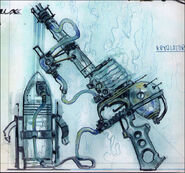 Add a photo to this gallery
Retrieved from "https://fallout.fandom.com/wiki/Cryolator_(Fallout_3)?oldid=3165339"
Community content is available under CC-BY-SA unless otherwise noted.