The Cryolator was developed by the overseer of Vault 111 as a way to occupy time, waiting for the All-Clear signal from Vault-Tec that never came. Using chemicals and components readily available within the vault, the prototype was able to be completed, making cryogenic freezing available in a portable, on-demand form.[1] Conceptually, it is a flamer that shoots ice.

The weapon creates a cryogenic spray when fired that fades away at mid-range. Firing continuously at an enemy may freeze it solid and render it unable to move or attack for a period of time. More durable enemies will require a longer exposure, and some cannot be frozen at all. The Cryolator can chew up large amounts of (rather expensive) ammunition, so use it wisely.

The crystallizing barrel mod will convert the weapon into an automatic crystal shooter. This makes the weapon far more ammo-efficient, as well as granting additional benefits such as increased range, increased damage (crystals do ballistic as well as energy damage), and a very small AOE. However, the projectiles do not travel particularly quickly and suffer from a noticeable flight trajectory.

Inside Vault 111, in a display case in the overseer's room behind a Master level lock. It cannot be picked up at the beginning of the game due to the inability to pick Master level locks before exiting the vault. Interaction with the case prompts a line from the Sole Survivor, saying that they will return for it later. An entry on the overseer's terminal in the same room can be found detailing the weapon and why it was built. 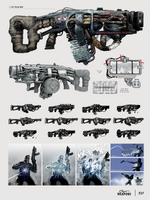 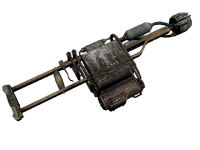 The Cryolator that was removed from Fallout 3

Retrieved from "https://fallout.fandom.com/wiki/Cryolator?oldid=2828876"
Community content is available under CC-BY-SA unless otherwise noted.