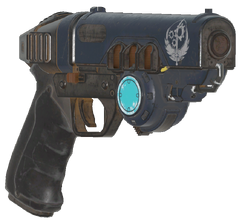 Cryo receiver (underneath the barrel)

The cryo receiver is a weapon mod for the Crusader pistol introduced in the Fallout 76 update Steel Dawn.

A receiver modification which adds cry damage that freezes targets and causes reduced movement speed for 5 seconds. Visually, the lower receiver is altered, to a round module with a glowing blue light on it.

Weapon modifications will modify an existing weapon, and any modifications previously equipped on the weapon will be destroyed, not unequipped. Loose mods cannot be crafted.

Craftable at any weapons workbench after having learned the plan.

Retrieved from "https://fallout.fandom.com/wiki/Cryo_receiver?oldid=3479239"
Community content is available under CC-BY-SA unless otherwise noted.