The largest room in both areas containing frozen super mutants

“Look at all these cryogenic chambers. They must be planning to fill them all with specimens from our planet!”— Elliott Tercorien

The deep freeze is where the aliens store the abductees they have tagged for their collections, or those they aren't currently experimenting on.

On the lower level by the entrance there is a small room containing a healing archway, 3 containers and various loot. The teleporter to the far right is used as an exit after the destruction of the generator.

In the middle of the map is a large room full of cryo-pods, aliens and a turret. The player can defrost all of these at once by pushing the button on the console below the window facing the area. This results in an AI battle between ghouls, raiders and aliens. Generally the turret is the only one left alive after the skirmish. On the bottom level is a cornucopia of Capital Wasteland items.

In the following area aliens can be viewed in a sealed room examining the bodies of three humans who Elliott Tercorien, if he is with you, will recognize as his squadmates. An enraged Elliott will activate a nearby switch freezing all those in the examination chamber, killing the aliens and opening the chamber doors. Within this room Elliott will gather some cryogenic material with which he later creates cryo grenades and cryo mines for the player. In the adjoining room Elliott contemplates what to do when he discovers two more squad mates still held in cryogenic suspension. With the player's input the squad mates can either be temporarily revived, euthanized or, on passing a speech check, merely left where they are. The squad mates will be hostile (to each other as well) if the player attempts to revive them before Elliott has restored their memories. Properly revived they will fight alongside the player and Elliott during the first few minutes of the cryo storage zone before expiring.

If the player did not opt to bring Elliott along, the examination chamber can be opened by activating the control switch that freezes the examination chamber. However, the dead humans will appear as wastelanders instead of Elliott's squad-mates. Furthermore, there will be no opportunity to gather cryogenic material and the two cryogenic suspension containers in the adjoining room will be empty.

This storage facility houses all the abductees in suspended deep-sleep.

This area is primarily a large 2-level chamber with a generator situated in a passageway at the northern end. Upon entering there will be passageways to the left and right, each with a healing archway. The Lone Wanderer can take either route as they both lead to the upper level of the same large chamber containing a number of hostile aliens.

The chamber's upper level has stations with blue tubes containing cryonic pods. Pushing one of the nearby switches sends a pod upwards and raises another from below while releasing a cloud of vapor that momentarily freezes anything nearby. Other switches mounted along the nearby railings deactivate large cryogenic suspension pods on the lower level, each reviving some form of super mutant (dependent on player's current level).

In the room to the north, past twisting hallways, will be the generator and a teleportation matrix to get out of the room once you've destroyed the generators. The teleporter will take you back to the very first room before actually entering the main part of the cryo lab containing the generator.

If the player attempts to reverse pickpocket Stimpacks or certain weapons (For Example: Heavy Incinerator) onto Elliott's Soldiers, these items will be erased from the game rendering no benefit to the NPC.

The cryo lab appears only in the Fallout 3 add-on Mothership Zeta. 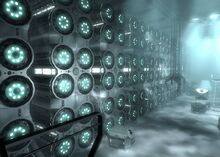 Cryo storage
Add an image to this gallery
Retrieved from "https://fallout.fandom.com/wiki/Cryo_lab?oldid=3322988"
Community content is available under CC-BY-SA unless otherwise noted.