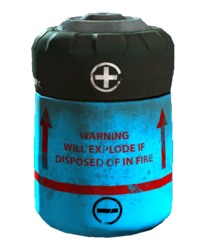 The cryo cell is a type of ammunition in Fallout 76.

These cells contain compressed nitrogen gas which is liquefied as it passes through weapons chambered in it (such as the Cryolator), resulting in a spray of super chilled liquid nitrogen.