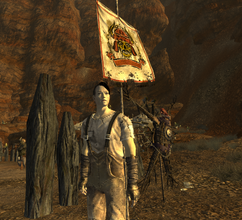 “The Followers of the Apocalypse came to our camp when I was a kid, and they brought a bunch of old books. I used to read pre-War poetry for hours.”— Jerry the Punk

Cry Me a River is a side quest in Fallout: New Vegas.

Jerry the Punk can be found by the fenced-in combat area, west of the entrance to Red Rock Canyon during the day. He is the only Khan that is wearing a Brahmin-skin outfit. With a Speech check of 33, he tells the player character that he does not actually wish to be a Khan and finds far more satisfaction reading poetry. He wants to be somewhere where poetry is appreciated and asks the Courier to speak to the Followers of the Apocalypse on his behalf. Speak with Julie Farkas at the Old Mormon Fort about Jerry wishing to join. After she accepts, travel back to Jerry and tell him the good news.

Retrieved from "https://fallout.fandom.com/wiki/Cry_Me_a_River?oldid=3476334"
Community content is available under CC-BY-SA unless otherwise noted.