Crushed the White Legs
“Haven't you heard enough of what's going on here to see that the Sorrows don't need to butcher the White Legs for a piece of land? What Joshua wants is more than an attack. He wants a slaughter. And he needs more than you and the Dead Horses to do it.”— Daniel

Crush the White Legs is a main quest in the Fallout: New Vegas add-on Honest Hearts. It is the opposing quest to Flight from Zion, in which the Courier chooses to help the Sorrows and Dead Horses flee Zion Canyon.

The Courier must speak with Daniel and tell him that they wish to fight and wipe out the White Legs with Joshua Graham. Daniel initially expresses some anger at the decision and will hastily disagree with it. The Courier then appears at the Caterpillar's Mound with Joshua Graham and he will provide details of the situation, explaining that he, the Courier, and a combination of Sorrows and Dead Horse warriors will assault the White Legs encampment at Three Marys.

After talking to Joshua Graham, the Courier joins Joshua and the latter provides the follower perk The Way of the Canaanite. Fast traveling is disabled during this quest, so they have to trek to Three Marys while fighting many White Legs along the way. The White Legs mainly seem to appear in groups of three at predetermined locations.

After reaching Three Marys' caverns, the White Legs detonate mines from an above rock formation, blocking the direct way to the camp's center (this obstruction will not be cleared, even after the ending). Following this brief cut-scene, Joshua will say that the Courier and he will end this no matter what. He leaves and his follower perk is lost.

The Courier must then go through the caverns to reach the other side of the blockade, reaching the innermost parts of the camp. After reaching the destination, a cutscene initiates with Joshua Graham executing two White Legs. He then makes a brief declaration to Salt-Upon-Wounds, mentioning the fall of New Canaan, Syracuse and Caesar's Legion. He also quotes the Bible, less now than before and speaks in the language of the White Legs.

After either killing or sparing Salt-Upon-Wounds, the ending cinematic plays, involving all of the appropriate choices that were made. After completing this quest the player character receives the O Daughter of Babylon achievement/trophy. Despite this being the staying option, Daniel, Joshua Graham, Waking Cloud, Follows-Chalk, and White Bird will not remain in Zion. Their clothes and other ending gear (such as Joshua Graham's scripture) can be found in the final footlocker, just before the Courier enters the southern passage to return to the Mojave Wasteland. 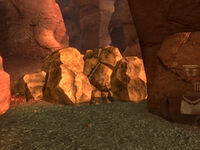 Path is blocked when following the riverbed 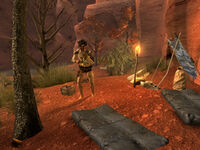 Camp on the way to Salt-Upon-Wounds